Exception in Java - Technical Round

Exception: An exception is an unwanted or unexpected event, that disturbs the normal flow of the program i.e at run time is called an exception.

It is highly recommended to handle exceptions so that the program terminates normally. The main objective of exception handling is graceful (normal) termination of the program.

What is the meaning of exception handling?

Example: Suppose our programming requirement is to read data from a remote file locating in India. At runtime, if the India file is not available then our program should not be terminated abnormally.

We have to provide a default local file to continue the rest of the program normally when the file is not found at runtime. This way of defining alternative is nothing but exception handling. 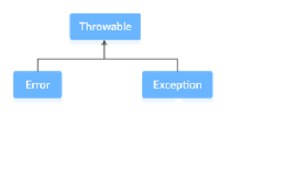 Different Between Exception and Error:

Most of the case exceptions are caused by our program and these are recoverable by the programmer.

Ex: If FileNotFoundException occurs then we can use local file and we can continue rest of the program execution normally.

Most of the cases errors are not caused by our program these are due to lack of system resources and these are non-recoverable by programmers.

Ex: If OutOfMemoryError occurs being a programmer we can’t do anything the program will be terminated abnormally. System Admin or Server Admin is responsible to raise/increase heap memory. 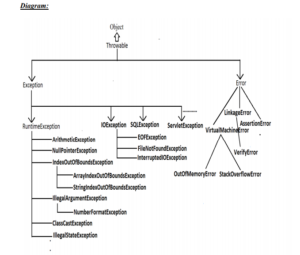 There are mainly two types of exceptions: checked and unchecked.

So if we are talking about an error then an error is considered as the unchecked exception.

A checked exception is said to be fully checked if and only if all its child classes are also checked.

A checked exception is said to be partially checked if and only if some of its child classes are unchecked.

← Multithreading in Java Classloaders in java →

12 Replies to “Exception in Java”